Roundhouse, Low, or high kick, it does not matter; they can knock out anyone by attacking the head and shutting down their rival’s legs, liver, and so on.

However, it is hard for some beginners to put the power into their kicks. Opponents catch their kicks, or they miss them because of bad timing.

In this MMAWhisperer guide, we will talk about tips that you should know to improve your kicking power.

So, after reading this article, you will have a plan, work out more efficiently, and be able to kick way harder than you can kick right now!

How To Kick Correctly In Muay Thai

Different kicks require different movements. However, I can guarantee you that there is no kick in Muay Thai that can be done without good movement.

Whether you want to fight in the UFC or just have a mean roundhouse kick, the technique is everything.

In the beginning, fighters think that the focus is the shin because it’s landing on the rival, and it’s what causes the damage and pain.

Guess what? They are wrong.

The whole body is involved in the kicking process, and each detail is essential.

Let’s discuss the most critical ones in more detail.

If you are fighting from orthodox standing in Muay Thai, MMA, or boxing and try to land a right low/roundhouse/high kick, you should create inertia with your right arm.

My coach also tells me that sometimes, you might touch your rival with your right hand and push his right side from you, forcing him to shift weight on his left leg and giving you inertia to the left, which increases the speed of your kick.

As a result, your rival and your low kick are moving in opposite directions.

Your left-hand stays right on your face in case your rival throws a right cross or overhand so that you can block it.

This might be obvious, but your leg movement means a lot during a kick.

Both the Kicking Leg and the Stance Leg Work Together

Left leg movement is essential while you throw the right kick and vice versa.

First, you have to rotate your left leg, but making a little step to the left while rotating, can increase your kicking power a lot because it creates extra inertia.

Hands and Legs are not the only things that are involved in the kicking process.

To strike most efficiently, your whole body should rotate during kicks.

Your hips, arms, and whole body should rotate to the left and make a quick exhale while landing it.

Rotating the whole body and stepping a bit left involves an entire body mass in this kick, increasing the power of your kick proportionally.

Training To Increase A Kicking Power

There are different workouts fighters can do to increase their kicking power, but from my experience, I can tell you that there are some exercises that are linked to each other and need to be done step by step, so let’s start at the very beginning.

To kick harder, you need to put everything in the kicks, but often, I was not using all my power in the kicks. My shin was hurting, and my brain instinctively slowed down my kicks.

I realized that the problem was not in the technique but in my shin conditioning.

There are different exercises to strengthen your shin. First of all, kicking the bag is a great exercise; I think we can make this process faster by improving shin condition without a heavy bag in the beginning.

After every workout, I was knocking on my shin with a 2lbs weight dumbbell or with anything like that. I started doing it very slowly, starting from the knee and finishing up to the ankle. Friction with dumbbells is also a great workout to strengthen the shin.

SHin conditioning for Muay Thai takes a long time. Your bones adapt and become stronger in response to the training stimulus. However, this requires recovery between sessions so new bone cells can form.

When just starting out, do 100-200 soft to medium kicks a week on a soft bag before you begin kicking firmer bags.

The most common and effective exercise to improve the kicking power is squats and variations.

Doing Squats with weights is excellent for strengthening your legs, but I do not believe that it will increase your kicking power.

For me doing just squats with weights on my shoulder made me stronger but also slower. So, I decided to train more explosively by adding jumps.

People always say you have to do it with weights, but it is unnecessary. In the beginning, the most important thing is to do it correctly.

Start without any weights on your shoulder, and try to hold your back straight, sit all the way down, and create a sharp knee angle between your hip and shin.

This is another workout that will increase the explosive power in your legs. The people who are using their legs like whips have high explosive power, and not just muscular legs.

You sit on your knees, touch your heel with your butt, and try to jump on the standard squat position.

There can be different endings for this exercise.

You might return to it and continue jumping, increasing your explosiveness.

But, my coach made me try to jump and throw a kick immediately. Afterward, I return to my knees and repeat 20-30 times.

Do you want better wrestling? Wrestle more. Do you want to be better at BJJ? Roll more.

If you want to be better at kicking, the answer is simple, kick more.

Pad work can improve your technique, but it is not the best for kicking power.

After finishing the training sessions, my coach forced me and my teammates, who were fighting professionally, to throw at least 100 left and another 100 right kicks on the heavy bag.

I did not understand it; when I was tired, what was the point of throwing kicks after good training, but after several weeks I realized that my kicking power, explosiveness in my legs, and stamina increased a lot.

This workout aims to kick as hard as possible to gas out fully. You can not pass your limits without putting in the work.

You have to get closer to the limits and push it as hard as you can.

There are some things you can do to speed up the process of kicking power.

I often find out that people join the gyms, even Thai Boxing, or BJJ, gyms, and after the main session is over, they keep doing the same stuff for months, and maybe years.

People keep doing what they love because they do not want to leave their comfort zone. Schedule, plan, and discipline will lead you to the results.

You need to plan your week with your coach. Please don’t do these workouts five days in a row; after that, forget about them for two weeks, and do them again for three days. This will not deliver better kicks.

Have a schedule, and spend 2 or 3 days of each week on these exercises, but discuss the days with your coach.

Ask Help For From Your Coach

At first, I was shy at the gym and could not ask for help from my coach. I thought he had lots of students. He was already too tired and did not have time and energy for me.

First of all, if the coach does not have time for you, then this gym is not the right place for you.

Second, every coach loves working with a student who wants to improve and learn more, so do not be shy.

Ask them to watch you doing exercises and give you feedback about it.

It is crucial to receive feedback because if you are doing it incorrectly, you must fix it as soon as possible.

After all, doing it incorrectly consistently will make you develop bad habits.

Having positive feedback is great, too, because you will be more motivated and confident, which will increase your productivity.

So, the feedback will speed up the process along the way.

Record A Video of your training session

It’s always a good idea to record a video, watching yourself training, because of several reasons.

I am always trying to record my sparrings, to see my bad habits, and fix them. Every professional athlete records their sparring sessions and then discusses them with coaches.

You might are doing some things badly, and you can see that from the outside. Also, you can compare your videos recorded now and three months ago and see the difference.

That would be great if you saw the result because of motivation, confidence, and productivity.

You might find some bad habits you and your coach could not see before, and trust me, there will be many of them because there always are.

Powerful kicks are vital to being an effective MMA fighter or Muay Thai artist.

While there are many ways to improve kicking power, the most important thing is to be consistent with your training.

It takes many years to develop speedy kicks that deliver knockout power without telegraphing your move to the opponent.

Stick with it and you will become feared for your kicks. 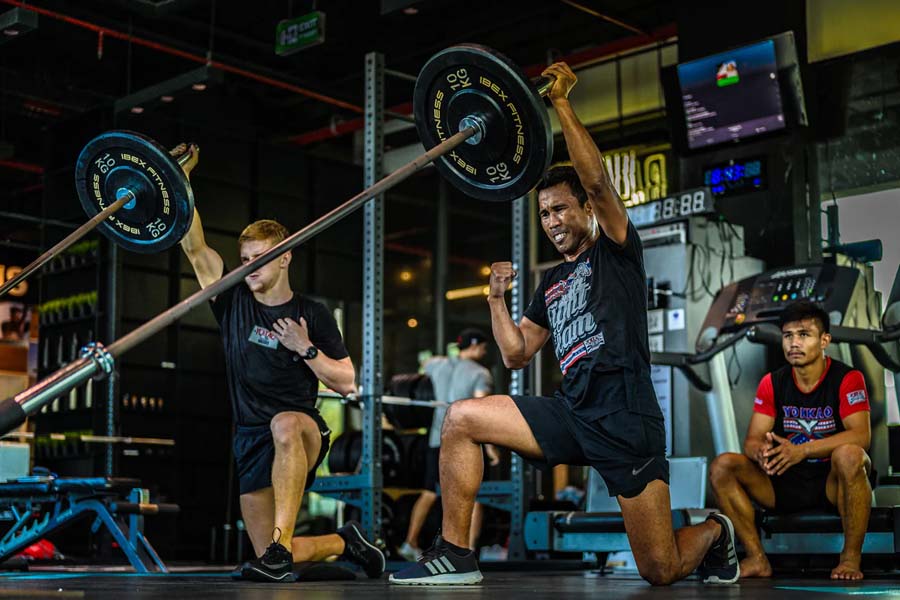